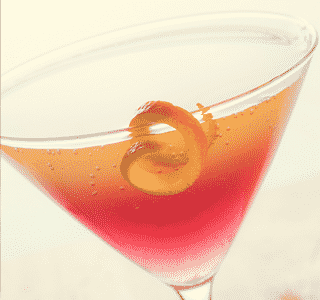 Ah, the 1970s. Word has it, they were good years. They brought us music from a classic rock band called the Eagles, as well as a famous cocktail/horizon in a glass, that both share the Tequila Sunrise moniker. Freixenet has respect for both, and in tribute, presents this delicious version of the cocktail made with love, from Barcelona. It’s also made with Freixenet Cordon Negro Brut Cava, which is, by the way, also from Barcelona. The trick of the original drink recipe was to keep the reds and oranges in layers resembling a sunrise, with grenadine at the bottom and orange juice at the top, but we’ve discovered it tastes fabulous however it goes into the glass. Technically speaking, it is considered a long drink, usually served in a highball glass, but whatever works for you, works for us. Cheers!

Mix pineapple juice, vodka and triple sec in a shaker with ice. Strain into a martini glass and fill with Freixenet Cordon Negro Brut Cava. Top with grenadine and garnish with an orange twist.

Our website uses our own and third-party cookies to improve and personalise your experience.
You can ﬁnd more information here. By continuing to browse this website, you consent to their use.